Lunch is being served in a half hour.  I’m relaxing beneath the shade of the main lodge’s thatched roof here at Wilderness Tented Camp in the Okavango Delta.  The ceiling fan above my head feels great.  The temperatures during this morning’s game drive were nice and cool.  As always we are split into two jeeps only this morning instead of us both going out on simultaneous game drives, one group started off on the mokoro canoes in the Delta while the rest of us kicked off the morning with some game viewing.

As we drove along the bumpy dirt roads we saw a dazzle of zebras running and watched an elephant using its trunk to sling mud over its back to keep cool.  Most of the areas we drove in were grassy and flat.  Like in Chobe, most of the trees in the Delta, are broken down by elephants and bare due to the lack of rain.  One of the women from our group, Donna, said she would love to come back after the spring rains to see all the beautiful green foliage.  Our guide “MP” noted that, from a game-viewing perspective, when the trees are in full bloom it’s much more difficult to spot the animals.  In fact, it’s practically impossible when they’re at a distance. 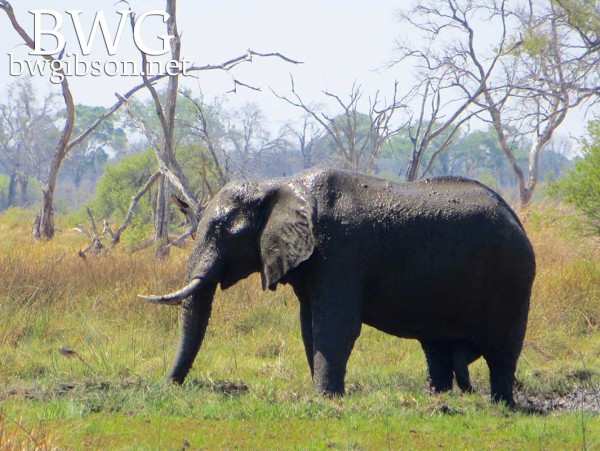 After a while, we approached a shallow  river.  “MP” parked our jeep and we all go out.  This is where we were going to begin our mokoro ride: two persons to each mokoro.  Standing at the very back of the mokoro is a “poler,” he holds a long pole known as a “ngashi” that he drives down into the ground of the shallow water to maneuver the canoe. 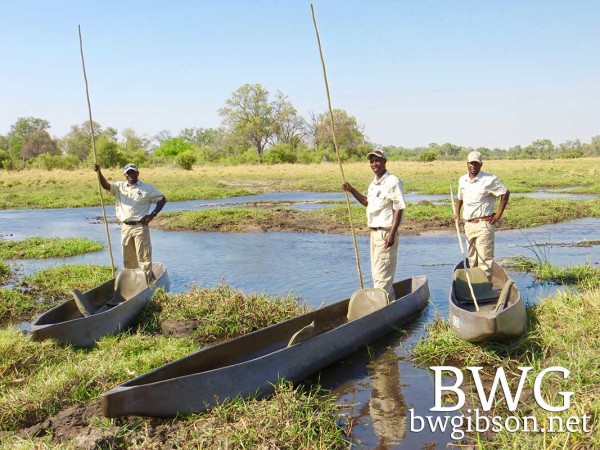 A few of the mokoro “poler” guides ready for us to board. 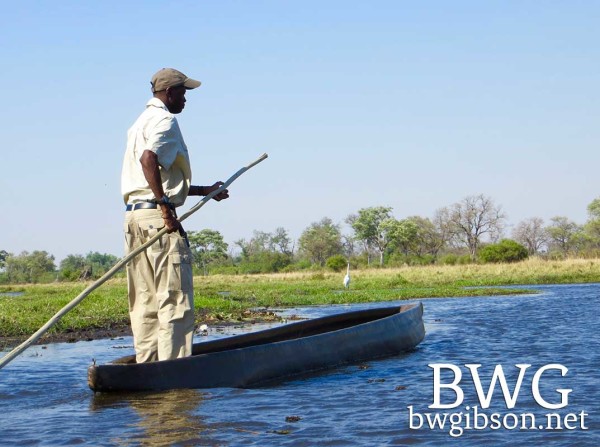 “MP” leading the caravan of mokoros.

Our ride lasted a little over an hour and from it we saw many different birds (this is the closest we’ve gotten to some of the different storks we’ve seen in the Delta without them flying away), some baboons, zebra, impalas, a roan antelope and two sable antelope – which are rare in this area.  The sable were coming to get a drink but as soon as they saw the 5 mokoros moseying along the water, they returned to the trees. Eventually, they reappeared in the clearing and walked up to the water to get a drink. 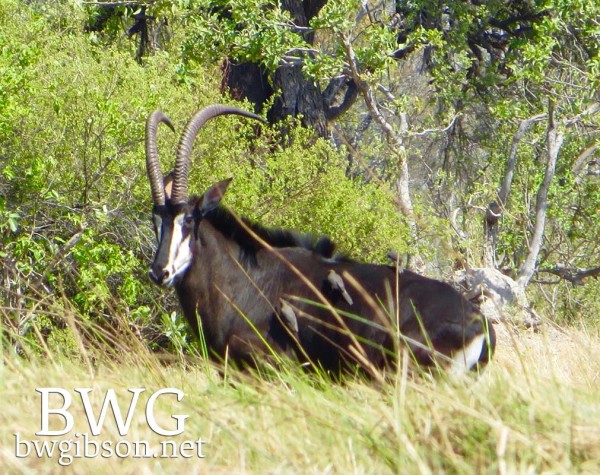 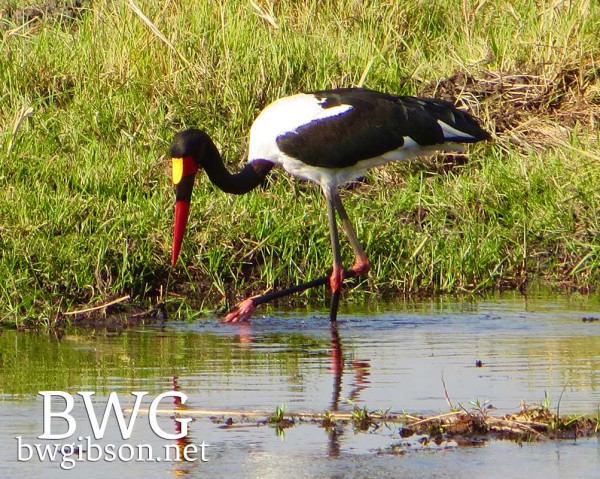 Red Billed Stork along the water during our mokoro ride

I was talking to Judy today and we both agreed that although these “tents” are by no means 5 star accommodations, the service we’ve been provided by the staff is a perfect 5.  Everyone is so friendly and seems to genuinely care about us.  Other than my “carry-on” Jack Wolfskin bag (that I bought in Frankfurt, Germany and absolutely love btw), I have never once lifted my suitcase (except for moving it within our tent).  Vitals refers to our luggage as “his babies.”  He makes sure everything is taken care of and we don’t have to worry about lugging our luggage to the mini bus or airplane or anywhere.    OAT is meticulously perfect when it comes to their customer service.  They do a great job.

What a hot afternoon!  Kay is calling it a “heat wave.”  She said she makes sure her morning work is done by 9A to avoid the heat.  She took us on a “behind the scenes” tour of the staff kitchen, laundry room and garage workshop.  It was funny when they took us into the giant cooler room where they stored the food.  I jokingly said to Cheryl – “that’s been the best part of the trip so far!”  It felt amazing to be in a cold room away from today’s extreme heat.  Ha!

I came to our tent and attempted a nap with a cool wet rag over my head.  It helps but still I can’t sleep.  There are a frequent wind bursts coming through the screens of out tent this afternoon.  Maybe they are blowing in either a cooler weather system or possibly some much needed rain.  I know a good rain would really make the locals very happy along with all the animals, trees, grass and the poor rivers that are extremely low.  I’m going to do some reading before we meet back at the main lodge for “high tea” while our guide “MP” delivers a short educational lecture on the Okavango Delta followed by our evening game drive. 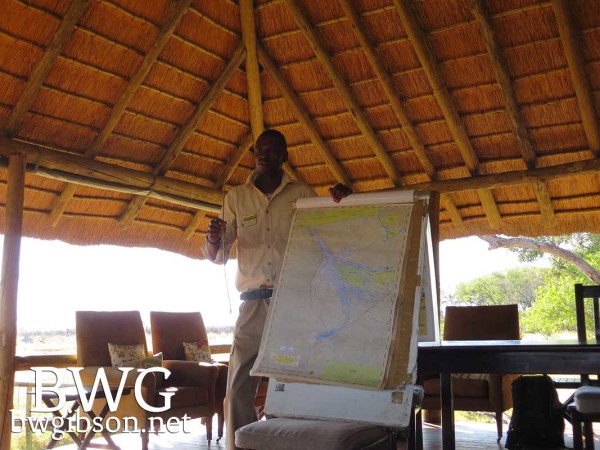 “MP” educating us on the history of the Okavango Delta in the main lodge.

Almost forgot to mention: I woke up around 1:15A last night to pee.  I could hear the mating calls of the male lions in the distance.  I fell back asleep to it.  Funny how that sound has become soothing to me. What a unique privilege.  I feel blessed.  I think Aaron would really enjoy this place (minus the heat wave).

Back in our tent.  Once again, the stars tonight are magnificent.  We are going to sit out on our front porch for a few minutes despite multiple warnings from our trip leaders and the staff.

The evening game drive was nice because the temperatures could down significantly.  Saw another Giant Eagle Owl carefully watching us from it’s tree perch. 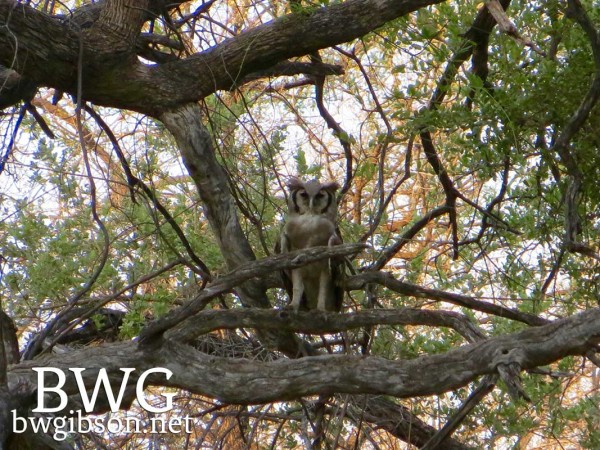 Giant Eagle Owl watching us in the Okavango Delta.

The sunset was breathtaking – got some great pics! 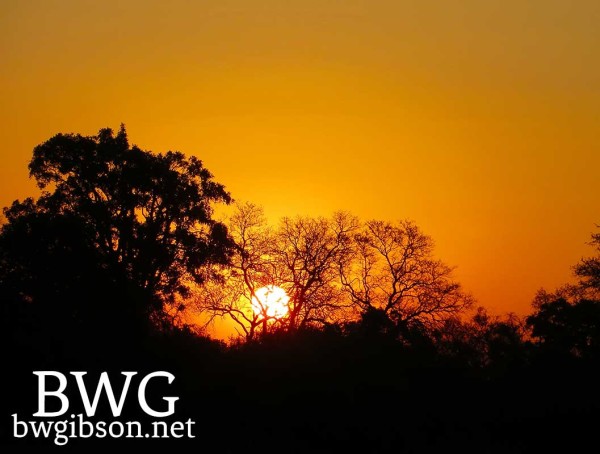 Our “sundowner” drinks were served by a large pool of water where some hippos were playing.  They were rolling over on their backs sticking their feet up out the water.  It was cute.  Hard to think of these creatures as threatening or dangerous.  After a while, the hippos began to make some grunting noises and in the distance we heard the growl of a lion. Up to that point our guides have always seemed relaxed but let me just say they were rushing to pack everything up and get us all loaded back into the jeeps.  Dark was upon us and we headed back to the camp for the traditional dinner.

Dinner was a delicious traditional meal around the “boma” followed by the camp staff choir singing traditional African songs and our travel group performing the “Hokey Pokey.”  Fun times!

Somehow the topic of social media came up during dinner and Vitalis explained that people here don’t really use Facebook anymore.  Instead they prefer a more “real time” form of social media called “What’s Up.”   I’ve never heard of it.

Vitalis jokingly said after dinner:  “Folks, I’ve got some very good news!  Tomorrow’s wake-up call is at 6A.”  Hallelujah!  We get to sleep in!  HA!!  After breakfast we are leaving Botswana and heading to our camp in Zambia via small planes, boat, a bus and another plane.

I want to get a picture with Kay, the facility manager, before we leave.  She is really cool.  We are also asking for recipes.  The food has been amazing, especially, today’s lunch salad of bananas, onions, mayonnaise, yellow curry and parsley.  What an odd combination but man was it delicious!