Relaxing on the front porch of our tent watching a warthog leaning down on its front knees eating some grass.  They are so funny when they run away too because they run with their tail sticking straight up like a radio antenna.

Today’s game drive felt long as the afternoon hours seared with temperatures nearing 100 degrees (38 degrees celsius).  It’s cool when the guide pulls over the jeep to show us animal tracks in the dirt.  This morning Paul pointed out a leopard and lion track right beside one another.  We saw some cape buffalo and a huge elephant that started directly at us for a while – very cool, then a few giraffes and before we stopped for tea & coffee around 9:30A, both of our jeeps pulled right up to two lionesses resting in the shade.

When we stopped for tea & coffee, the other jeep in our group had a flat tire that Paul, MP and Proctor had to change.  We also found an elephant skull laying in the grass.  A few of us, including myself, picked it up.  It was huge.  I got a great pick of me holding it.  On these morning coffee & tea breaks I usually request tea.  They serve “bush tea” which is a rooibos.  I take mine with warm milk. 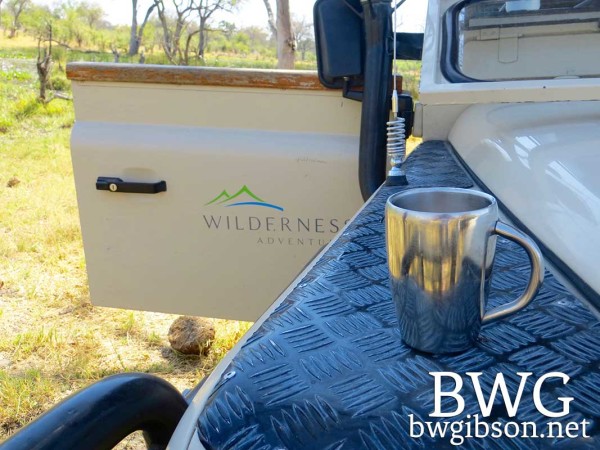 Morning tea on our game drive in the Okavango Delta.

(Now the warthog is walking towards us).  By the time we returned to our camp were all felt dazed and dehydrated from the heat and the only water in our water bottles was warm.  I headed straight for our tent and downed the entire pitcher of ice cold water.  Took of my shirt and laid face-up on the bed with a cold washrag over my head.  That really helped.  I had the oscillating floor fan directed on me but soon realized it was just blowing around the hot air (sigh).  My camera battery had died (TIP:  pack spare batteries) so I missed shots of all the wildebeests we saw but did get a vid of the zebras running across the road in front of us with my iPhone.  Very cool!  We also saw a parade of elephants on our way back.  Oh, plus, when we stopped for lunch a dozen, or so, elephants walked into the pool of water just a few yards away.  They were gathering there to cool off, taking up water into their trunks and then spraying it up into the air so it fell down on top of their bodies like taking a shower.  It was funny because the guides were trying to serve lunch while we were all distracted snapping dozens of photos of these fascinating elephants. 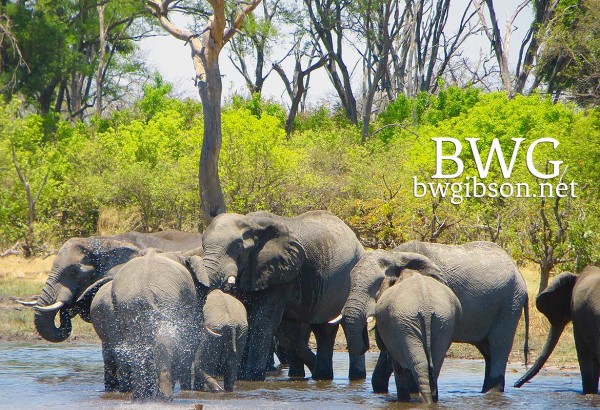 Elephants spraying water to cool off in the hot Delta sun.

On two separate occasions we came across a stride of giraffes, one stride, of which, was gathered along a river and in order to lean down for a drink they had to spread out their legs.  That was one of my favorite pics I’ve taken so far! 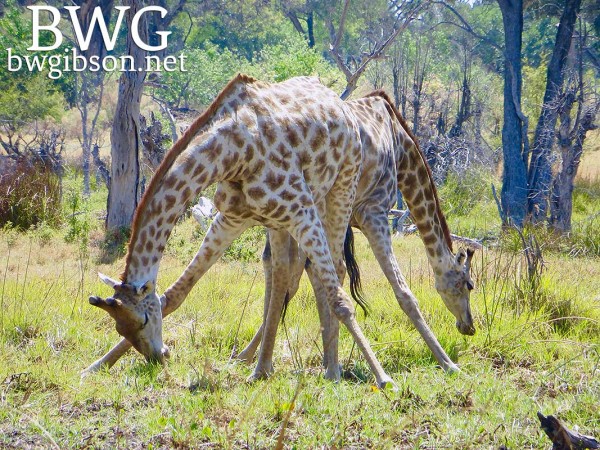 Giraffes in the Okavango Delta, Botswana 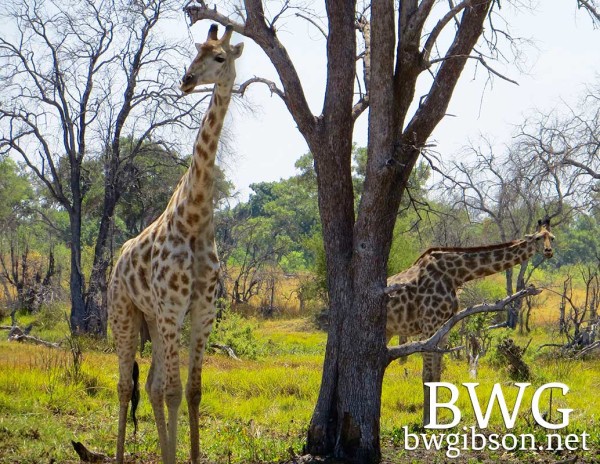 Such curious creatures. Notice the giraffe to the right; neck stretched out and peering directly at the camera.

We also came across a pride of 5 lionesses calmly shading themselves beneath a toothbrush tree but the highlight was finding two male cheetahs (believed to be brothers) keeping cool and well-camouflaged under a bush.  Our guide Paul pulled the jeep right up to the bush and the cheetahs became edgy.  They soon took off, springing into the air and running to another bush.  But that didn’t stop Paul.  He started back up our engine and slowly drove right up to the cheetah’s new resting place.  Not long after the second jeep, carrying the remainder of our group, arrived.  We all just sat there watching these stunning creatures.  Paul said that cheetahs haven’t been seen in the Okavango Delta since April, so we were very fortunate to have witnessed this sighting.  Wow!  What a discovery for our group.  Again, felt very privileged.  The cheetahs left that bush and went to a third, and it was no surprise that Paul and the other jeep’s driver “MP” followed.  Finally, the cheetahs seemed to be calming down and realizing our jeeps were not a threat.  We sat there for a long time.  It was hot but no one seemed to care.  These animals were so beautiful. 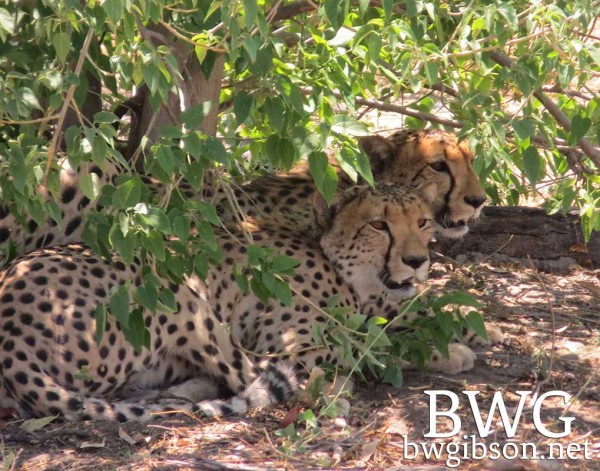 Cheetahs hiding amongst the leaves and looking out for lunch. 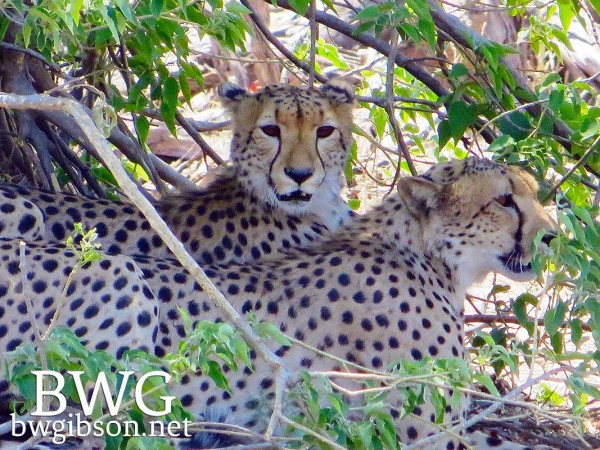 Looks like one of them may have spotted something (no pun intended – haha!)

(The warthog was just staring right at us and when I stood up to grab my camera, he took off).

Our drive back to camp was painfully long (or, at least, felt so due to the heat).  We passed through a small village known as Khwai, which is actually the village Proctor is from.  Most of the homes were wood framed with walls made of mud from termite mounds.  The roofs were thatched.  Some buildings, like the school, the boma (meeting place) and two “shopping centers” which were no bigger than a 2 or 3 car garage, had cement walls and corrugated metal roofs.  It was cool seeing this village up close and you could tell that Proctor was so proud to show us.  Unfortunately, my camera battery died as we were driving into Khwai. 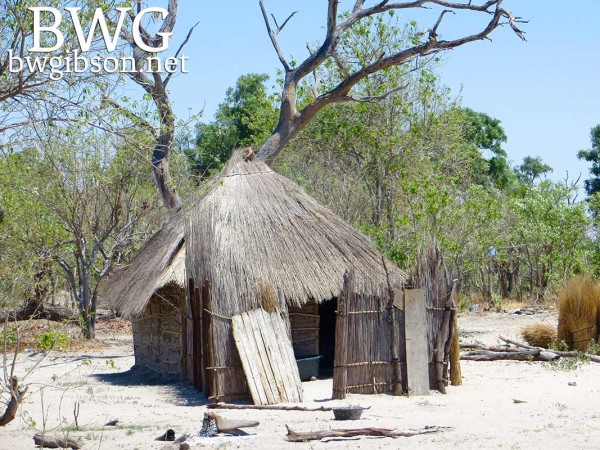 A thatch-roofed hut in the village of Khwai, Botswana.

I am enjoying talking to all the local people we meet who work at the camps and I’m amazing by how many of them have never left Botswana – not even for “holiday.”  (Now, two enormous cape buffalo have entered the field outside our tent to graze).  The facility manager’s name is Kay.  She is awesome.  She shared with us that she has travelled to San Francisco and worked at Walt Disney World.  She got a HUGE smile on her face as she told us.  She said she loved both experiences.

It’s now shortly after 5P and dinner (a “surprise”) is being served at 6P – very excited!  I’m enjoying the view now.  Later!  (Now there are 3 hungry warthogs a few yards away from us eating the grass). 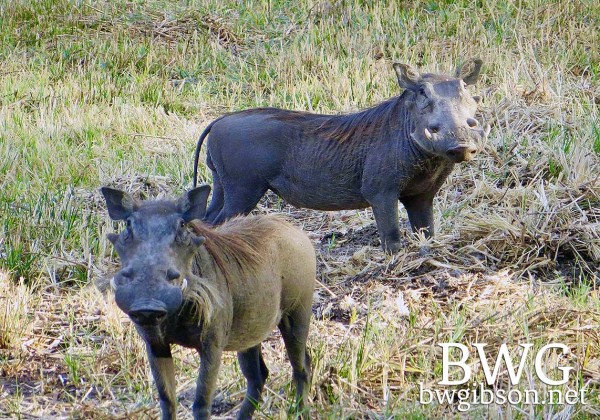 Two of the three hungry warthogs right in front of our “tent.”

Bedtime. Exhausted.  Dinner was tasty and for dessert they served a pancake with chocolate syrup – yum!).  It’s been great getting to know our traveling companions (their backgrounds and interests) and hearing them share all their other amazing OAT travel experiences.

There are so many stars out tonight going all the way down to the treeline.  I wish my camera could capture night shots.  It’s just amazing how clear the sky is here.

P.S.  Today was our hottest afternoon yet – reaching 103.  Thank God for Vitalis suggesting wetting a washrag with cool water from the sink in your tent.  It really does wonders.  Some of the women form our group said they drenched their bath towel in cold water and laid down in bed with it over their entire body.  They said it felt amazing!