Thirty years ago, when I was a kid, I loved looking through my parents World Book Encyclopedia set.  I would lay on our family room floor paging through, in awe, at all the pictures of different places around the world.   One specific picture always caught my attention and I remember thinking: “One day, I’m going to go there and see this for myself.”  It was the Leaning Tower of Pisa in Italy.  Years later, towards the end of 2006, my dear friend Aryn called me with a proposition.  She said that her and another friend of ours, Zephy, had chosen Italy as their next travel destination.  We would be there in May of 2007 for 2.5 weeks!  “Sign me up!” I rejoiced!  “There’s just one thing … we HAVE to go to Pisa and see the Leaning Tower.”  And so we did.  I will never for get how amazed I was standing there at the base of this 830 year-old, freestanding bell tower, feeling an uneasy hitch in the pit of my stomach with 14,500 metric tons of limestone and marble glaring down at me.  Truly amazing! 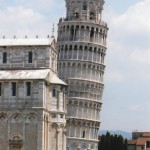 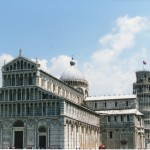 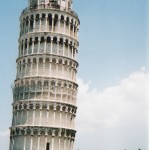 Driving in Pisa, Italy takes exceptional skill … which is exactly why I did not drive in Pisa.  My friend Aryn did the driving.  On our way there we were almost mulled off a cliff by a gigantic blue bus.  Once inside the city limits, Aryn instructed me that any backseat driving or yelling out “Oh Look!  There’s the Leaning Tower!” would get me kicked to the curb.  So I was careful to keep my comments to myself as I eagerly looked out all 6 car windows with anticipation.  Finally, I caught my first glimpse of the famous Leaning Tower and we parked in a nearby lot.  The structure surpassed my expectations.  It was so beautiful yet intimidating by just how much it actually does lean.  We had lunch outside at a small pizza restaurant in the shadow of the tower.  As you can see by the pictures it was a beautiful afternoon.  What a memory!  Some day I’ll go back.

When in Rome … Roam

The old English Proverb replayed in my head as the Leonardo Express shuttled my friends and I from Rome’s International Airport to the central Termini train station.  From there we dragged our suitcases along the bumpy cobblestone streets to our nearby hotel.  It was late afternoon and a nice sit down pasta dinner was a in order.  This was our first night in Rome and my first night in Europe!  Excitement doesn’t begin to describe how I felt and immediately after dinner my jet-lagged friends were ready to dive into bed.  WHAT?  Are you for real?

I had to go find something to do … and drink!  “When in Rome …” played again in my head only this time “Rome” morphed into a verb (roam).  I told my friend Zephy to not wait up for me and off I went to roam the streets of Rome.  My eager footsteps and wide eyes led me through the streets past a McDonald’s.  Hanging in the restaurant window was a red neon Peroni sign.  I thought: “how cool would that be to buy my first Italian beer at McDonalds!”  Carrying and drinking my open beer bottle I meandered through the ancient streets and alleyways wondering what excitement I would stumble upon.  Just then, I thought: “The Colosseum!  I need to find it!”  So I set out, mapless, at a faster pace.  I looked up and down every street hoping to be fortunate enough to find the famous amphitheater.  Soon I started coming across directory tourist signs posted at major intersections.  These markers gave me confidence that I wasn’t setting myself up for a wild goose chase.

Maybe a half hour or more passed before I stepped up to a long narrow alleyway.  I remember this 2007 moment like it was yesterday.  I turned my head left and there it was!  I froze … although only a mere sliver of this monstrous structure was visible.  It took a while to peel myself away from this moment before I walked up the long alleyway.  With each step, the view of the Colosseum became clearer and larger until I came to the end of the alley to see a full view of the grand Colosseo.   How small I felt.  How amazed I was that ancient man could construct such a mammoth composition.  After walking around it’s entire exterior I found a seat atop a cement ledge and watched as the sun set through the stacked rows of open archways.  What a memory!

I have shared this story with many friends who have told me they were traveling to abroad.  I was in a strange land of a foreign language and probably should have secured a map before hitting the streets, but instead, I followed this voice in my head to be adventurous, take risks and when in Rome … Roam!

It was half past six a.m. on my first morning in Venice, Italy. I was wide awake with the early sun and wandering the narrow streets populated only by the local children on their way to school. My destination was breakfast on the Grand Canal. The first thing I learned was how easy it was to get lost in a city that’s only 3 x 2 miles in size. For a moment, I became hopeless and was one maybe two turns away from attempting to retrace my steps back to my hotel in Piazza Roma. All the little shops and boutiques were still closed and off and on I would pass a small, lonely cafe but my goal was to have breakfast on the Grand Canal, even though I had been warned it would be expensive.

Finally, unaware as to how, the street I was traveling opened up and there stood the Rialto and to its left and right the crystal blue, famous waterway I was looking for. What a relief, especially considering immutable growls coming from my stomach. I walked past one the first cafe and spotted the perfect outdoor seating environment shortly thereafter. I walked through the cafe entrance and a waitress ushered me to help myself to whatever table. She explained, in English, that breakfast was continental and asked for my drink order. There were croissants, danish, scrambled and hard-boiled eggs, bacon, sausage, cereal, granola and a modest array of fruit. I helped myself to a plateful and swallowed the lump in my throat that was warning me how much this might very well cost.

I nestled into a table for two right on the water’s edge. Within minutes my cappuccino arrived. It was a beautiful peaceful morning and through two servings of caffeine I marinated in the sights and sounds that surrounded me.

Perhaps an hour or less passed and I decided I better start trying to find my way back to the hotel to see if my friends were awake. I motioned for a waitress. She came over with a smile and I requested the bill. (This is where the story gets interesting). Her response to my question was a request for my room number. My jaw dropped and the next few seconds were extremely awkward. I wasn’t really sure how to explain myself when I realized the restaurant I was sitting at belonged to a hotel. “Should I lie? Hmmm …” I wondered. After another blundering pause I proceeded to explain that I was staying at a hotel in Venice … just not this one.

Without hesitating the waitress said: “That’s okay, do you have a key?” I reached into my shorts pocket and pulled out our room key. The waitress nodded and told me to enjoy the rest of my stay. I was confused as she walked away but thought to myself: “Wow!” What I thought was going to be one of my most expensive meals in Italy turned out to be the cheapest! “I can’t wait to tell my friends!”

A Food Tip for Travelers

In Italy you can have a great-tasting and filling meal for cheap as my friends and I discovered one evening in Florence, Italy.  Florence is located in the Tuscany region of northwestern Italy.  Famous for its beautiful rolling wine vineyards and Cyprus trees, check out the meal my three friends and I shared for a total of $11.00 US dollars (at the time that converted to about 17,00 Euro.  A full plate of Genoa salami, a separate full plate of pepperoni, a loaf of bread (Italian – of course), a plate of olives and sun dried tomatoes, a plate of soft Asiago cheese, a pear and 2 nectarines and a sweet dessert bread I stumbled upon.  These items were picked up at various markets along a street nearby our hotel.  However, we later learned we can accomplish the same purchases at a one-stop shop supermarket chain there called Coop (pronounced: coh-ahp).  Oh wait … I forgot the mention the best part … this $11.00 price tag ALSO included 2 bottles of wine and a bottle of water.  Can’t beat that huh?!  Much cheaper than any of the restaurants we ate at.  The four of us sat down at a long table in the private garden of our hotel.  We RELAXED and ATE  and laughed without any crowds or waiting for a table and enjoyed one of my favorite moments on this 2 week Italian vacation.