After our visit to St. Mary’s School we returned to Kashawe Camp in Hwange National Park.  Just after passing through the boom gate we spotted a lioness walking in the grass.  She was on her way to lie down in the shade of a tree.  As we zoomed in with our cameras we discovered she had a rather nasty scar around her neck.  Our guide, Mafuka, said it was from a snare trap and that he was aware of this particular lioness.  He explained that the park wildlife reserve will soon be coming to treat her wounds. 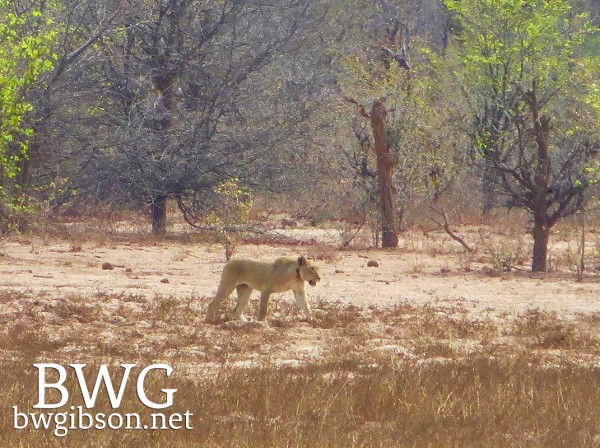 Wounded lioness walking towards the shade.

Our evening game drive started out with a nasty flat tire.  Our guide, Thabani, quickly resolved the situation and we were back on the dirt road.  We soon encountered a giant “obstinacy” (herd) of cape buffalo.  These animals appear incredibly curious as they all stop to stare at us in our parked jeep.  As long as we sat there, they stood there watching. 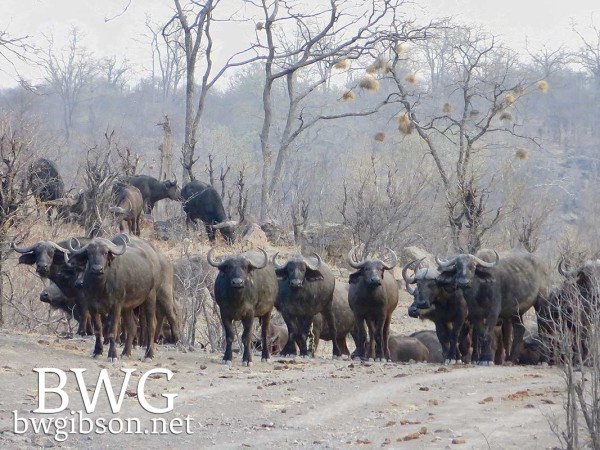 The drive continued without much excitement until we got word from another jeep that there was a pack of 19 painted dogs nearby  ‘Painted dogs?’ I thought.  I had never heard of such a thing.  Thabani stepped on the gas and hurried us to where they were just spotted.  Who would have imagined wild dogs could be so beautiful.  Their mottled black, beige and white coats are stunning.  They have large round ears and dark brown circles around their eyes.  What a peculiar yet handsome sight! 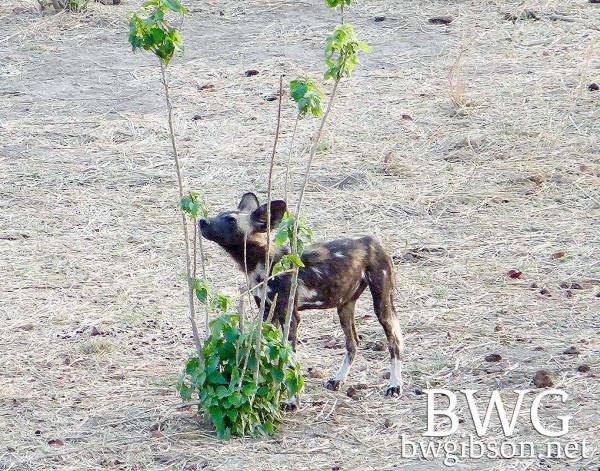 The dogs were quick to move as they were hungry and hoping to find food before sundown.  Our jeep was on the road looking down from a low ridge and the dogs disappeared for a moment but then we found them again.  They had identified a potential meal: a lone female kudu and the hunt began.  Oh wow!  How lucky are we to see nature in full action.  The kudu went into the river as her protection against the dogs who were pacing back and forth surrounding her.  The hunt lasted over a half hour – right through sundown.  At one point (probably twenty minutes into the hunt) every one of the dogs disappeared.  This was a strategy to confuse the kudu into thinking she was safe to leave the water, which she did, and the dogs instantly reappeared.  Quickly, the kudu escaped back into the water and now the dogs became more aggressive.  They started entering the water in a drawn-out relentless hunt to secure their dinner.  As they drew in close, water was splashing everywhere and with the night sky around us it was impossible for my little camera to  capture the final kill.  But we could see it from where we all stood at the edge of the bluff.  After a 30 or so minute hunt the dogs succeeded in killing the poor kudu.  They all piled on top of her and in less than three minutes she was eaten.  What a rare sight to witness – talk about National Geographic live and in person! 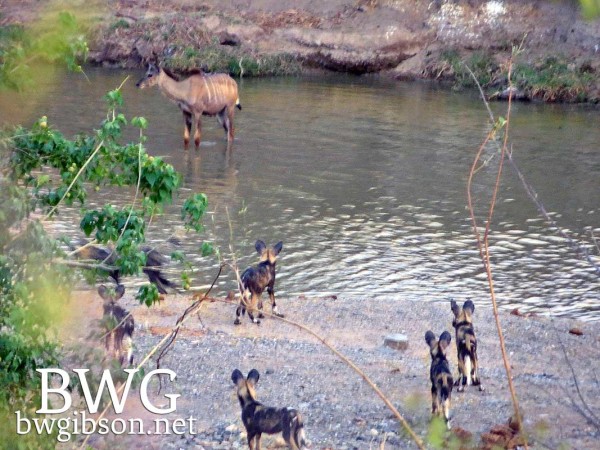 Painted dogs have the female kudu trapped in the river. 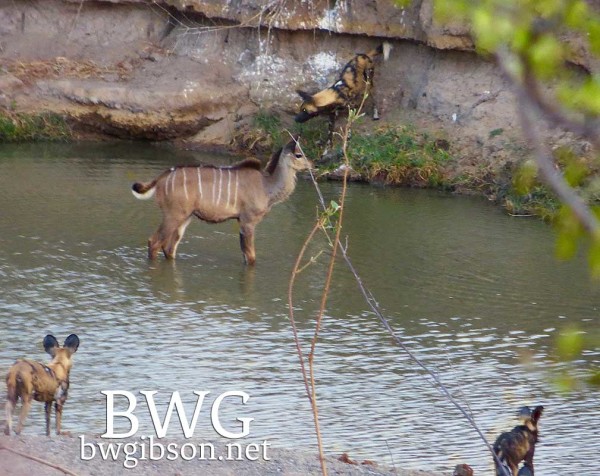 Painted dogs desperately trying to get close enough to make their kill.

I also caught some pictures of the beautiful sunset behind us.  Those of us who chose to go on this game drive were so excited to brag about our discovery to the rest of the group when we returned to camp.  “Good good” as Vitalis would say.

Expecting rain, we all gathered outside around the crackling fire of the “boma” for some entertainment before dinner.  Over the bluff, the distant overcast night sky was being lit up in a deep maroon by the oncoming  showcase of lightening.  The staff formed a drum circle and performed for us and we followed by them singing the African national anthem.  It was beautiful.  Next, Judy led our group in “The Hokey Pokey” and the staff all joined in.  We all laughed and danced and sang together.  It was so much fun! 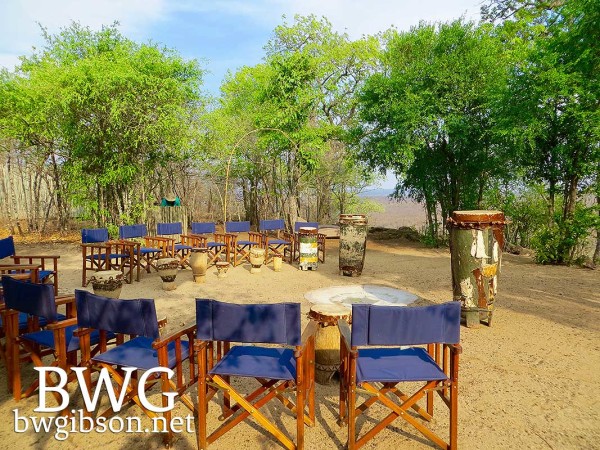 This is a shot of the boma during the daytime.

Next, Sally announced that dinner was served.  First, there was soup and then the main course was served buffet style.  As I’ve mentioned before, I love our dinner conversations.  There’s always so much laughter and new discovery as you get to know the local staff.

Now, I’m propped up in my cozy bed.  For the last 45 minutes or so we’ve been listening to the intimidating mating grunts of a leopard.  He seems to be getting closer.  Despite the other mating sounds we’ve heard, including the lion which I actually find quite soothing, the leopard mating call is a little scary.  I hope he doesn’t decide to come up on our front porch.  The winds have really picked up and are actually sounding rather ferocious.  I hope, if it does rain tonight, it’s a nice gentle rain.  But just in case of a storm, Aryn and I are setting our night stand lamps down on the floor (to avoid them being knocked over by the wind) and unplugging our phone chargers.