Sitting on the front porch relaxing in the cool afternoon temperatures of Hwange National Park, Zimbabwe.  Let me start by writing about last night.  What a fantastic thunder and lightening storm.  The lightening first appeared in the distance filling up the entire sky with deep shades of red.  Not long after, there came bellowing roars of thunder that spanned for nearly an hour as I lay awake in bed.  I was hoping for rain and between wind bursts I could hear footsteps in the grass outside our “tent.”  The wind bursts became so ferocious that one particular gust blew so hard against the canvas wall behind our beds that it knocked over the lamps on Aryn and my nightstands.  This really made us nervous and my first reaction was to quickly unplug my camera battery that was charging.  Then, I replaced the lamp onto the nightstand and finally it began to rain.  The rains were heavy and I pulled the heavy comforter up to my chin to keep warm.

Eventually, the weather system moved out and we were able to sleep again.  The following morning we both admitted our concern over the canvas roof possibly ripping right off or the doors flying opening and a lion creeping inside to escape the rain.  You know, I never did figure out what those outside footsteps were.

After a nice breakfast, the following morning, we headed out on our first game drive of the day!  The sky was overcast and a light rain materialized which really cooled things down to, I’d say, the mid 60’s.  It felt amazing.  I can’t say enough good things about OAT.  They don’t miss a trick because the jeeps came equipped with enough green ponchos for us all to wear.  Unfortunately, when the rains come the animals hide.  We did, however, see a few impala, zebras and some birds. 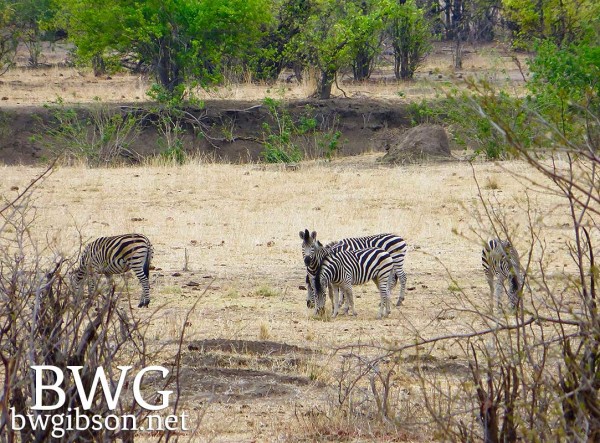 After a while, we stopped at a picnic area with bathrooms.  The guides served up our morning tea and coffee with these wonderful rosemary shortbread cookies.  Since it was overcast and slightly raining, we gathered beneath the thatched roofs of one of the structures that stood beside a giant candelabra tree. 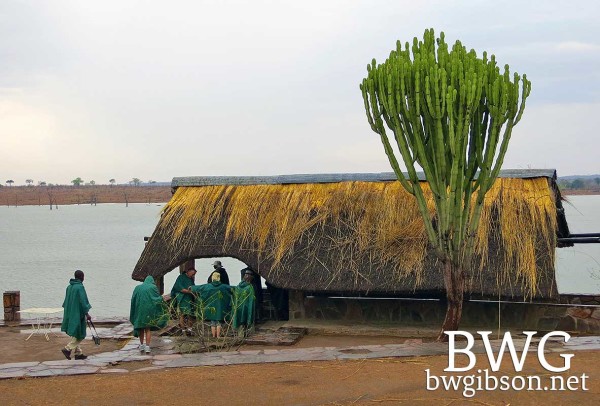 Pavilion where we gathered to escape the rain for our morning tea & coffee. Notice the beautiful candelabra tree.

One of our guides, Mafuka, had taken some long strands of tree fiber from one of the baobab trees.  He began by pressing them in a downward motion along his leg and by doing this he was able to twist the strands into a tight, thin rope.  He, then, used these short ropes to make bracelets for all the ladies.  I, selfishly, asked him to make one for me as well, which he did.  He also made one big rope and, when holding it up, said it was strong enough to tow one of the jeeps.  Wow! 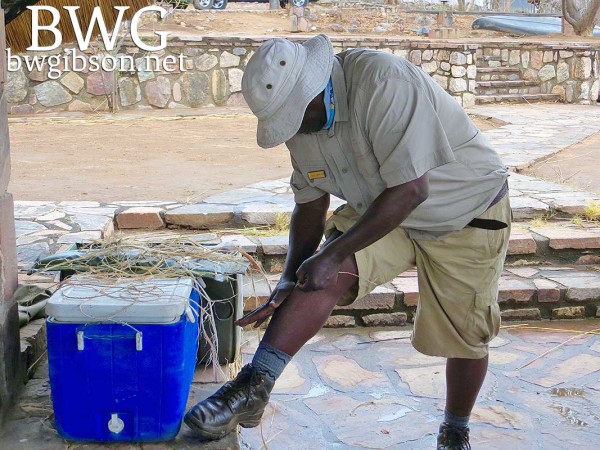 Mafuka making the bracelets out of fibers from the baobab tree.

While Mafuka was making the bracelets, he shared with us bits and pieces of his life and the Zimbabwean culture.  He particularly focused on the cultural practice of polygamy.  Very educational.  Mafuka is 74 years old.  He has been leading game drives for over 50 years.  He, now, has 3 wives as he divorced his 4th one years ago.  Divorce is a very informal process here in Africa.  The man simply tells his wife he no longer wishes to be married to her and sends her on her way.  No divorce attorney or paperwork is required.   If there is a child between them, the man is expected to provide for that child.  Sometimes this gets messy.

The process of getting married is fairly simple, as well.  If a man likes a particular girl, he simply courts her and if she falls in love with him and and he wishes to be married, he asks her to marry him.  If she says yes, he, then, pays a dowry.  The dowry price ranges based on the value of what the woman can bring to the marriage.  For example, if she is educated, she could bring a substantial income to the marriage and, therefore, the price of the dowry increases.  Mafuka gave the example of “10 cows and $5,000,” as a dowry price.  He also explained that if a guy has a good reputation the dowry price is lower than a guy with a bad reputation.  This is the opposite of what we would think would determine someone’s dowry price.  However, it’s done this way so to possibly discourage a “bad boy” from marrying your daughter by raising the dowry cost hopefully to a level that he can’t afford.  Smart thinking!

Mafuka continued by stating that if a man finds another available girl that he likes or, in some cases, his wife may suggest bringing in a particular girl (say one of her cousins) and the man likes her, he can ask her to marry him as well.  Mafuka said he knew of a man with 40 wives.  He also shared that despite having multiple wives, some men cheat on their wives with a mistress.  This can create a lot of village gossip.  Our other game drive guide, Thabani, is much younger (probably in his mid 20’s) and has only one wife and three children.

We also learned there is a lot of societal pressure around having children.  So much that there have been cases where girls who were unable to bear a child have committed suicide.  There have also been cases of men committing suicide from the stress of trying to keep his mistress a secret from his wife(s). 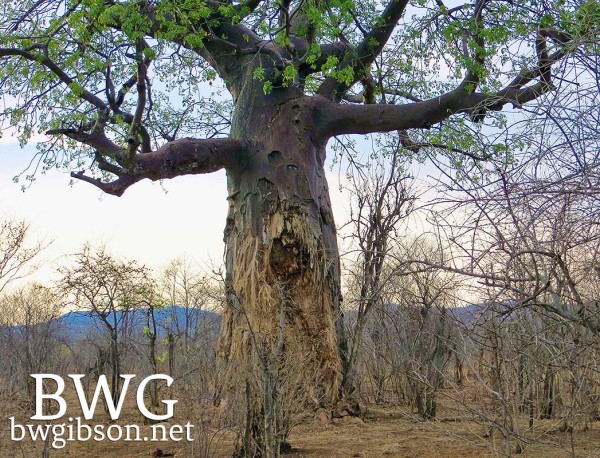 Beautiful baobab tree where Mafuka stripped the fibers to make our bracelets. Notice the extensive scouring of bark. This is the work of elephants rubbing their bodies against the trees and can be seen throughout Hwange.

(This conversation will continue in part 2 of Day 13)

How To Connect When You Have Nothing in Common