The Victoria Falls Hotel is situated in the Victoria Falls National Park along the southeast corner of town across from the falls.  Built in the early 1900’s, its grand Edwardian architecture capture the spirit of old aristocratic England. 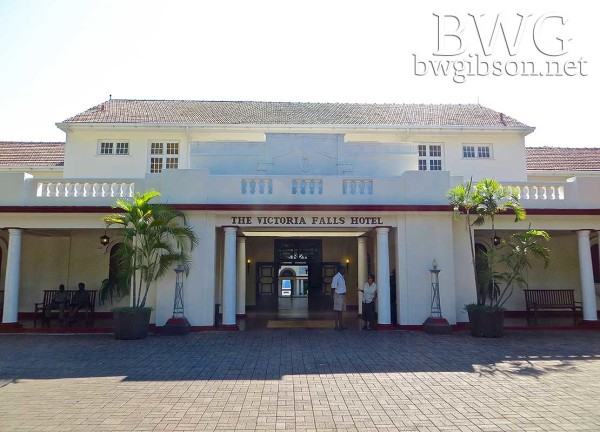 Front entrance of The Victoria Falls Hotel in Zimbabwe

We entered the main lobby and walked all the way back to the exterior terrace (known as Stanley’s Terrace), passing through an open garden area and ornate guest parlor. 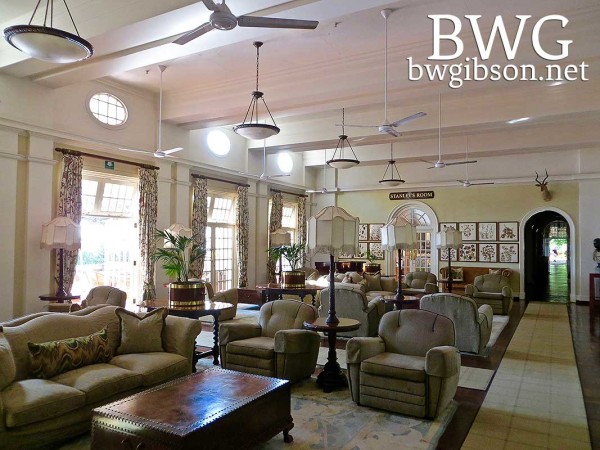 The beautifully elegant “Stanley Room” at The Victoria Falls Hotel

From the terrace you could see the Victoria Falls Bridge framed in lush green trees.  It was absolutely stunning. 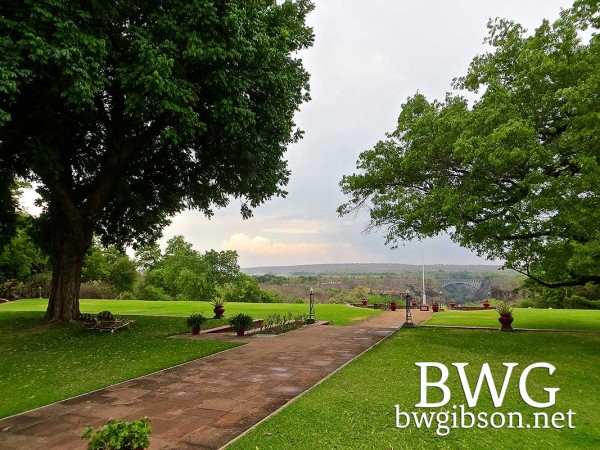 View out to the bridge from the terrace of The Victoria Falls Hotel in Zimbabwe.

A host seated us at a table along the terrace.  We all ordered the iced coffee and Aryn also got some multi-colored drink.  I was hungry so I ordered the Caesar salad with grilled crocodile – yes, crocodile.  I couldn’t resist it when I spotted it on the menu.  When it came out, I thought how strange to see this salad with beautiful greens, shaved parmesan cheese, creamy balsamic dressing and fresh cracked pepper with slices of crocodile on top.  This was definitely a first.  I took my first bite with Aryn, Kathryn and Judy eagerly watching to see my reaction.  It was amazing and actually tasted sort of like chicken.  LOL   The iced coffee was amazing as well.  It came in a tall clear glass with a scoop of vanilla ice cream on top. 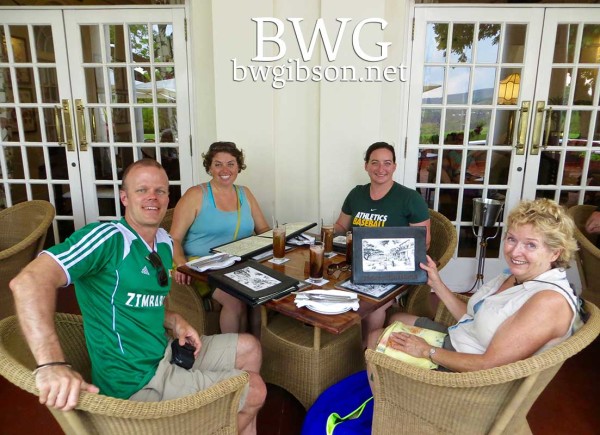 Judy, Kathryn, Aryn and Me seated for high tea at The Victoria Falls Hotel

After enjoying a relaxing time and nice conversation with the ladies we went to the lobby to call for a cab.  Aryn and Katheryn couldn’t help but hit the gift shop.

That night was our dinner cruise on the Zambezi River.  Our white minibus took us there where we were greeted by a quartet of tribally dressed men with drums singing and dancing.  It was really cool and they sounded awesome! 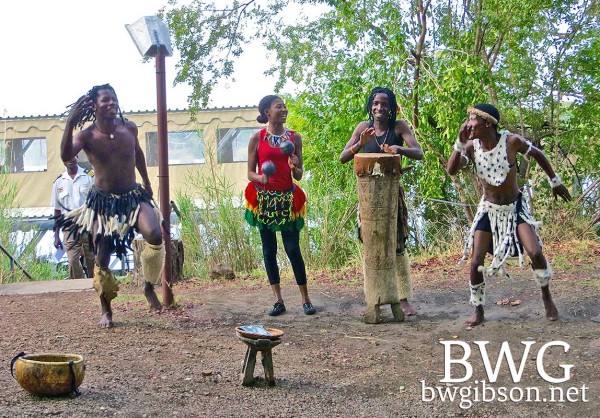 Then we all boarded the boat and sat down at two long tables.  Vitalis informed us that the first two rounds of drinks were on OAT.  This was the only group meal that we would have to pay for out of pocket.  I ordered a Merlot from South Africa but for my second drink took Vitalis’s suggestion when he said:  “You’re on the Zambezi River you gotta drink a Zambezi beer!”  Perfect idea, so I did.  Waiters took our orders but we were quick to jump up from our seats to snap photos of the oncoming hippos. 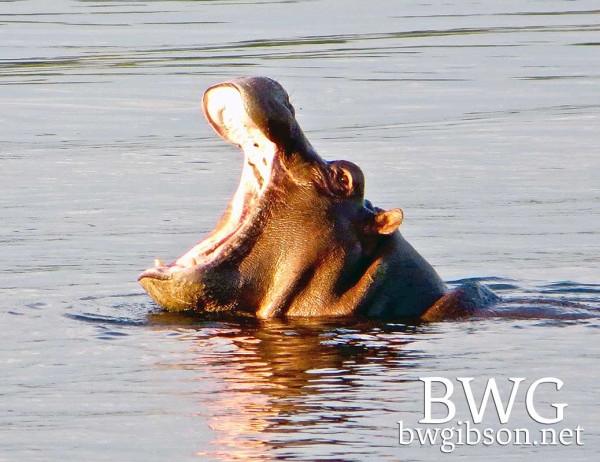 Hippo yawning in the Zambezi River

All of a sudden, the starboard side of the boat was pulling up to the river’s edge so we all gathered over there to look.  There were two crocodiles: a mother and a baby.  They barely moved as we all stared and snapped photos. 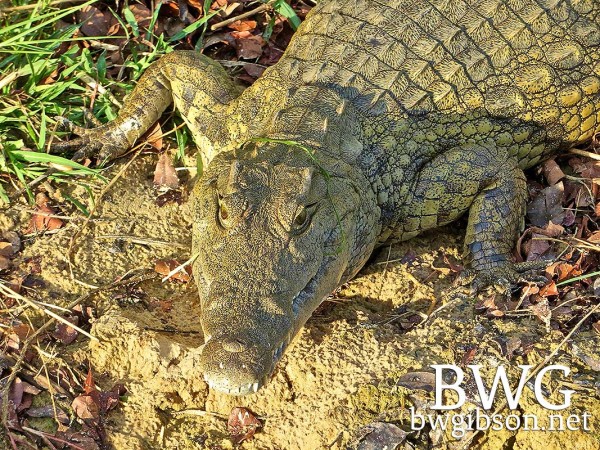 Crocodile at the edge of the Zambezi River in Zimbabwe

As the boat continued on down the river the sun began to set and, once again, we were all up out of our seats taking photos of the beautiful sunset.  In fact, I think our group may have set a new record that night for the most sunset pics on a given night.  Haha!  What a wonderful way to spend our last night in Africa. 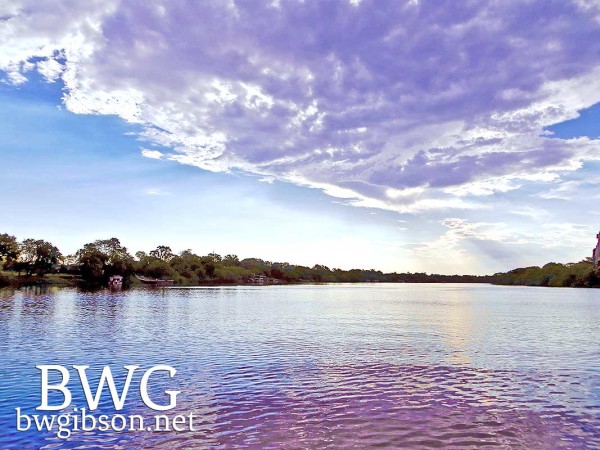 The sky over the Zambezi River was stunning that evening. 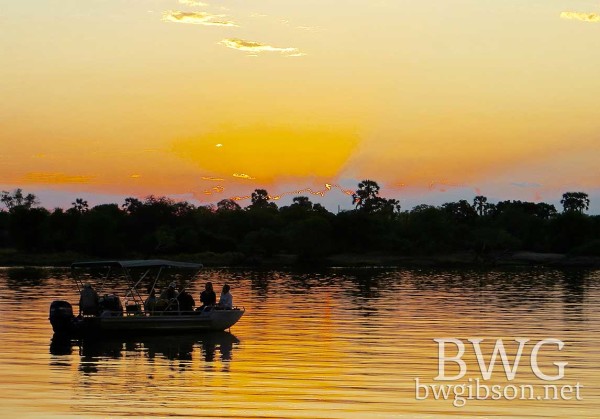 The sunset would not quit. It was so beautiful we were constantly up and out of seats taking pictures. 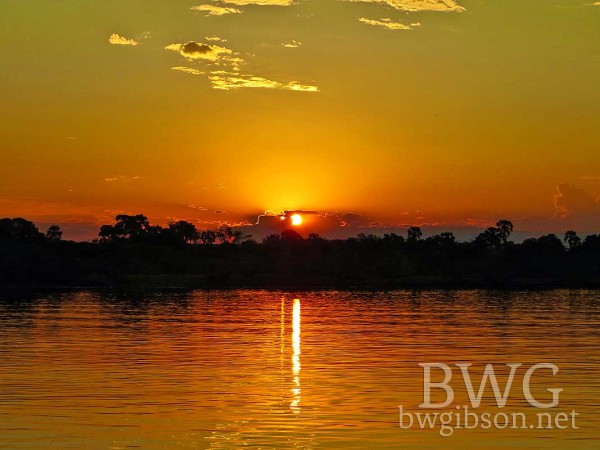 God saying good night over the Zambezi River in Zimbabwe.

As a special thank you to our amazing trip leader, Vitalis, one of the ladies in our group, Nora, sang “You Are My Sunshine” with new lyrics she had written that captured many of the highlights from our unforgettable trip.  The lyrics were so thoughtfully clever as well as “hilarious” (as Cheryl would say).

We all had a fantastic time but it was also sad as we realized we would all be leaving the next day (minus those traveling on to Cape Town for the trip extension.  I would have loved to include Cape Town and see the penguins.  However, I only had three remaining weeks of vacation time since I had already used up my fourth week traveling to Boston and Washington DC during the spring.  The folks going on to Cape Town were Cheryl, Norma, Barbara, Dana and Norm).  I also wish I could have done the pre-trip destination to the Thornybush Private Game Reserve in South Africa.  Donna was on that part of the trip and told of many wonderful and close-up animal sitings.  Perhaps next time.

Well, its’ been a long and eventful day and I really should get some sleep.  It feels funny to be back in a conventional hotel room, versus a “tent”.  I miss my African nights soundtrack of cicada’s accompanied by scattered calls from prowling lions, hyenas and baboons.  I should try and find a CD of that somewhere when I return home.  Being immersed in the crux of nature facilitates for a peaceful, drowning and delicious night’s sleep.  Although I miss Aaron and my dog Louie, it’s going to be hard to leave this place.  Africa has exceeded all my expectations.  I love it here and hope to return someday.  I would love to actually stay at the Victoria Falls Hotel.