This was to be my first time ever riding in a helicopter!   I wasn’t nervous at all – only excited.  There were six of us seated in the back with Judy up front next to the pilot.  I was seated against a window but honestly, it wouldn’t have mattered where I sat because the windows spanned both sides of the cabin area and they were crystal clear.   There wasn’t a bad view from any seat in the chopper. 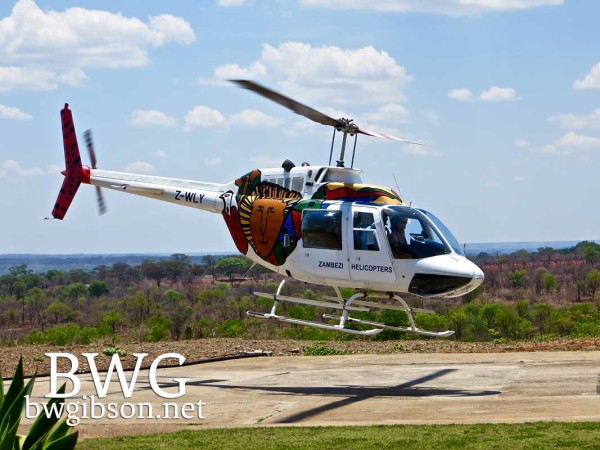 Our helicopter for the “Flight of Angels” over Victoria Falls. 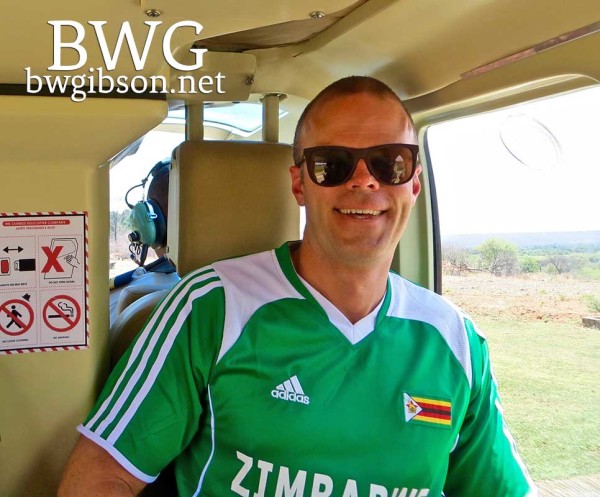 Me inside helicopter before take-off.

The 14-minute flight was called “The Flight of Angels” and took you up along the entire length of Victoria Falls and out over the wide Zambezi River. 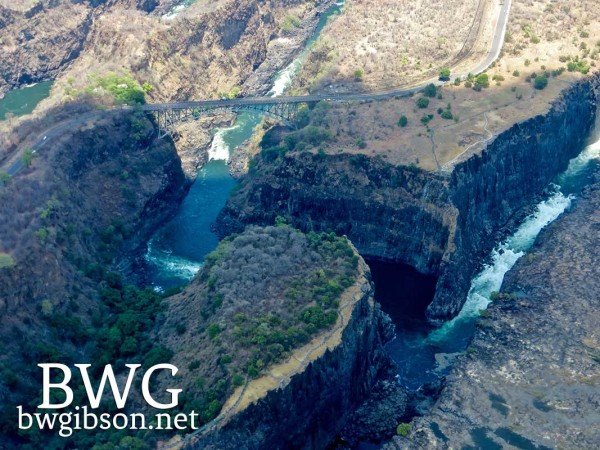 Dry season for the f alls. During the rainy season, this would all be waterfalls. You can see the Victoria Falls Bridge in the upper left-hand quadrant. 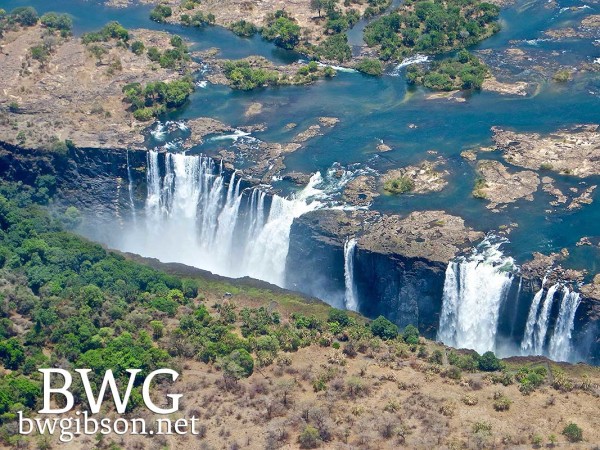 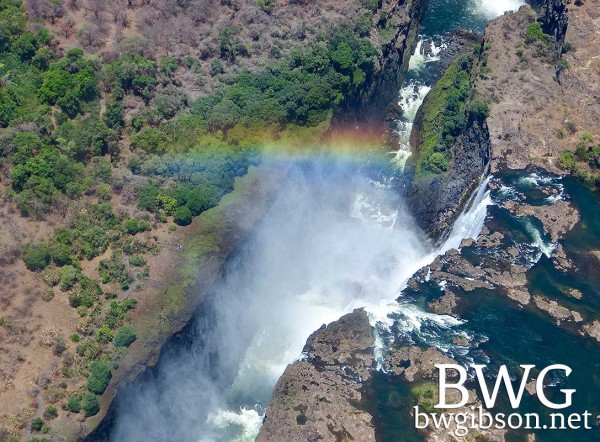 The mist from the falls makes beautiful rainbows. Here is one of them.

The pilot formed a figure eight over the falls dipping us down just to the edge of the rocks.  As he made the figure eight he titled the helicopter on both sides presenting us with a complete bird’s eye view.  On the portion of the falls that were dry, he flew low enough to see the beautiful detail in rocks of the canyon walls. 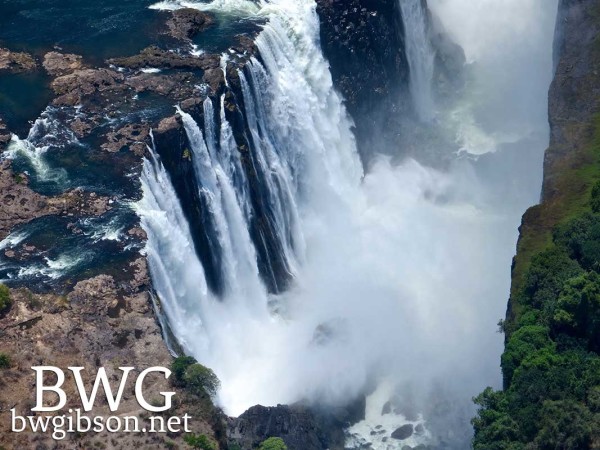 Dipping down into the amazing falls.

I took lots of pictures and savored every minute.  What a fabulous way to experience my first helicopter ride!   When we returned to the helipad and deplaned we were all smiling from ear to ear.  From the helipad we were walked back to a the gift shop area and into a small room where a video was played of our flight.  There was an option to purchase the video but I opted out.

Now it was time for the short minibus ride back to the Sprayview Hotel.  Aryn, Kathryn, Judy and I sat down for a quick lunch in the pool area.  While we ate a baboon leaped up onto the half wall behind the pool.  Apparently, it was thirsty because it made its way to the edge of the pool and stuck its face in for a drink. 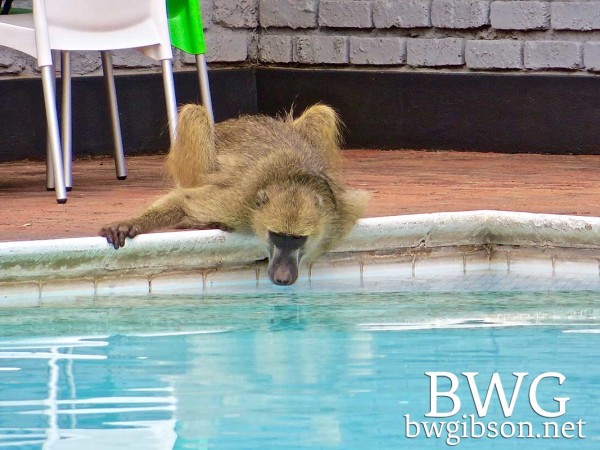 Baboon comes to our pool for a drink.

Then another baboon appeared on the roof, reached up into the low-hanging tree branches and grabbed a piece of fruit.  Got some great pics of that.  The two baboons didn’t stick around too long nor did we.  As soon as we were through eating we were on a mission to hit up the open-air markets with our money and various items for trade.

The “curios” market area was wide-spread and located just behind the post office and banks.  It was a $5 taxi ride or 15-minute walk.  We took the taxi figuring we’d save time so we’d have more time to shop and make it to the Victoria Falls Hotel for high tea.   The open-air curios markets consisted of three long corrugated metal roofed structures supported by heavy wooden posts.  A narrow dirt walkway ran all the way from one entrance to the back of the shops, then looped around and continued back along the opposite side all the way to the other entrance. 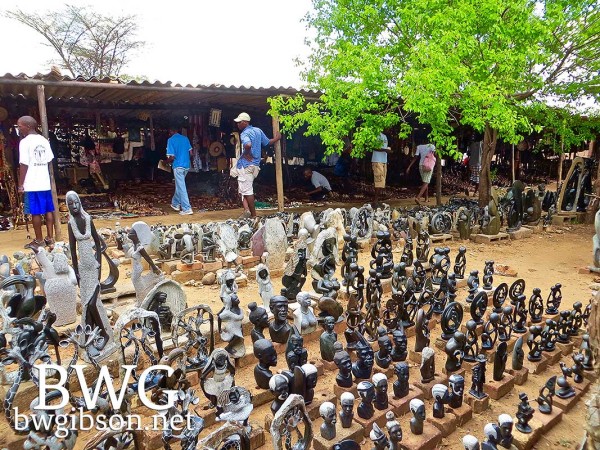 View of one section of the open-air curio markets in Victoria Falls, Zimbabwe.

Each vendor’s space was squared off and stocked full of hand made, locally-inspired  curios – mostly animals carved from sandstone and various types of wood.  You could also buy African masks, bowls, beadwork, bracelets from elephant or giraffe tail, fabrics and the discontinued Zimbabwe currency.  (Inflation had taken so much hold on the Zambezi currency that the government discontinued it and now they use American Dollars and South African rands.  Those who cannot find work and are stuck with this useless currency have resorted to selling their bills as souvenirs to tourists as a means to make money to buy food). 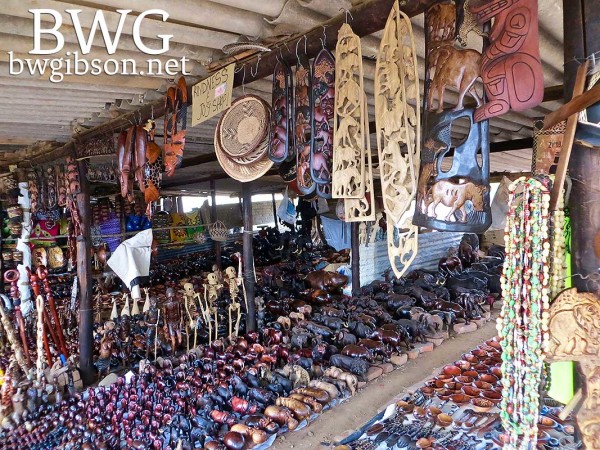 One the vendor spaces at the curio markets.

These vendors were eager to capture your attention and relentless to get you to buy.  They all offered “a good discount my friend” as none of the prices were fixed and cash could be paired with an item for trade.  The first thing I bought was an olive wood statue of two giraffes.  The original price was $55 and I ended up paying $15 plus my Spiderman tank top and Boston Red Sox T-shirt.  I also had two plain white T-Shirts that I traded later on for two olive wood bowls that had “The Big Five” carved along their exterior.  One of my last trades was the small desk-top battery-operated fan I had brought for the trip.  I traded that plus $5 for a small, hand-carved wooden bowl with a lid. 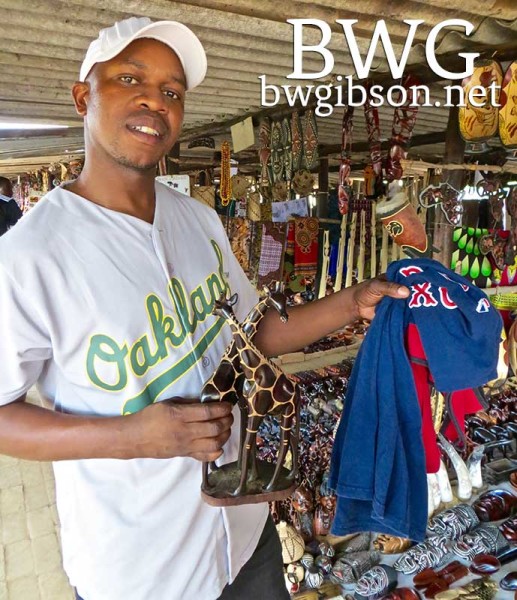 Trading my Red Sox T-Shirt and Spiderman tank for a wood carving of two giraffes.

Across the way, I spotted a cute little sandstone hippo soap dish.  I loved it but wanted to save my cash since we still had a number of other shops to see.  The guy wanted $15 for the small soap dish.  I thought about it as I stood next to Aryn who was busy bargaining her wares for some bright-colored beaded bowls.  As I told the salesman “no” he lowered his price to $12 and I reached in my pocket and pulled out a five dollar bill.  I explained that $5 was all I had left (not true).  He said he couldn’t lower his price to $5 so I thanked him for his time and walked over to Aryn.  The guy quickly followed me and said he could lower the price to $10 but that was it.  I explained again that all I had left was $5 and he asked if I had anything to trade.  Unfortunately, I had traded everything at that point (it’s amazing how fast my trade items went).   That is when the guy asked to see my socks.  At first, I was confused.  He looked down at my feet and asked me to take off my shoes.  Apparently, socks are wicked expensive and with Zimbabwe’s 80% unemployment rate most people can’t afford them.  In fact, I noticed this guy was’t even wearing socks.  My socks were Puma brand and when I rested my hand on his shoulder for balance and took off one shoe at a time he wanted to make sure there were no holes in my socks.  Pleased to see there were none, he offered to trade my socks and my five dollar bill for the hippo soap dish.  Aryn and I could hardly believe what we were hearing.  I explained to the guy that I had been wearing these socks all day but he didn’t care.  So I took them off and for my dirty socks and five bucks I got my hippo soap dish!  There were a ton more shops to hit and there I stood with no socks.  LOL  I thought the whole experience was hilarious and I mostly did it for the great story I could tell people back home!  Haha! 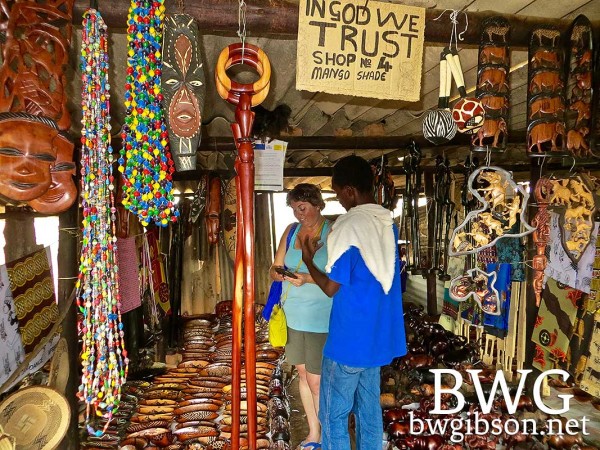 From that point on, Aryn and I followed one another very closely.  We had lost Judy and Kathryn and almost tripped over a warthog as we exited the first curio market.  In the next section I bought 2 lace pitcher screens (to cover a beverage pitcher from bugs) for $7 and just across the way two sandstone carved statues.  One featured the heads of two giraffes (this was going to be a gift for my dad) and the other was a statue of two red billed hornbills (this was for me).  The lateness in the day was to my advantage as I was able to take the sales guy down to $40 for both of these statues. 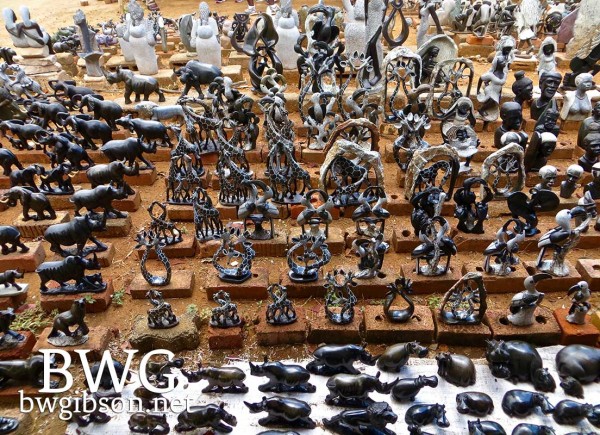 I was quite happy with all of my purchases/trades.  Now I just have to figure out how I’m going to pack all these items to keep them safe during the flight home.  I did bring an extra that I could carry on the plane, just for this reason.  I will see if the hotel is willing to give me some news paper or something to wrap everything.  I’m also glad I brought a travel luggage scale to verify that I stay below the maximum required weight permitted by TSA.

Eventually, we spotted Judy and Katheryn who were ready to leave and so we did.  Our next stop was Victoria Falls Hotel.  On the way there, the photographer from our elephant back safari came out of one of the stores with my photo CD from my ride.  I had completely forgotten I had ordered one so I paid him and on we walked through town and along the train tracks to the beautiful and famous Victoria Falls Hotel.