Our minibus drove us from the Sprayview Hotel into the center of Victoria Falls.  Vitalis informed us that if we wanted to go shopping later on or the following day we could either call a cab or walk.  Walking, he said, would only take between 15 and 20 minutes.  Vitalis had already taken our lunch orders for the Rainforest Cafe and we were all very hungry but before going to the restaurant he informed us that there would be a slight detour to see a “surprise.”

We were all excited with anticipation to see what “surprise” Vitalis had in store.  As we drove around the Victoria Falls Park we arrived at an enormous 1,400-year-old baobab tree.  This sucker was enormous.  We all got off the buss to take pictures. 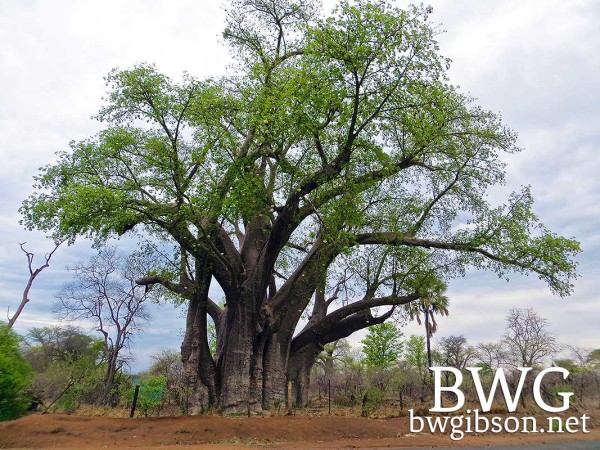 After our stop at the baobab tree, we drove to the Victoria Falls Park entrance where we had  wonderful lunch at the Rainforest Cafe. 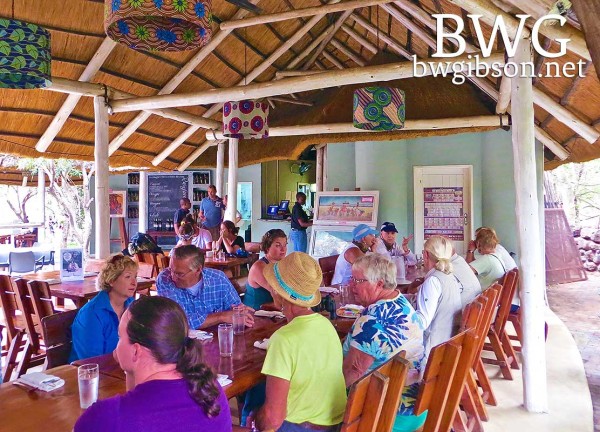 Our table at the Rainforest Cafe.

Our meal was delicious but dessert was quite possibly the BEST desserts I’ve ever eaten in my entire life: a scoop of chocolate mouse with a slice of flourless chocolate cake.  (Thank you Donna for not being able to eat sweets which left an extra dessert that I quickly and selfishly volunteered for myself).  As an added bonus, an extra dessert was mistakenly served to our table.  A huge smile swept across Vitalis’s face and he said:  “Brian, the restaurant seems to have overestimated our servings of dessert by one.  Would you like this extra slice of chocolate cake?”   I practically jumped up from my seat and grabbed it.  BONUS! 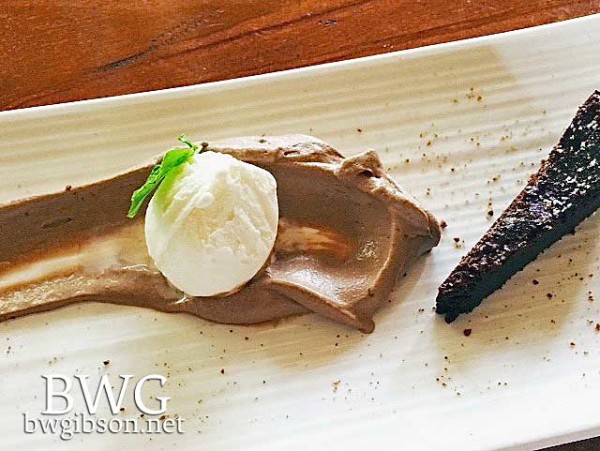 The most AMAZING flourless Chocolate Cake with Chocolate Mousse.

What happened next soon came to be known as “the chocolate cake incident.”   As I was about to dive into my THIRD chocolate mouse/cake  dessert I began to feel a little guilty so I offered a bite to Aryn, Kathryn and Judy who said no.  So I asked Cheryl:  “Do you want a bite.”  (stressing the word “bite”).  Well, Cheryl accepted without batting an eye and practically grabbed the plate right from my hands and placed it on the table between her and Norma.  Like vultures, the two of them proceeded to DEVOUR my dessert!  My eyes burst from their sockets and I gasped.  I couldn’t believe what I was seeing.  It was as if these two women hadn’t had a meal in weeks and I had to move quickly if I was going to get any of my dessert back.  “Hey!”  I said, “that’s mine!  I was just offering you a bite.”  Cheryl and Norma looked up with a shocked look of guilt.  “Oh my God,” they said with a laugh.  They thought I was giving them the entire plate.  I, then, took back what little scraps of my dessert were left and “the chocolate cake incident” became a running joke from that moment on.  As Cheryl would say with a hearty laugh:  “It was HILARIOUS.”

During lunch, a young David Livingstone impersonator stood among the tables and told of his life and missionary travels and vision for Africa during the mid 1800’s.   I’m sure many people have heard that famous quote:  “Dr. Livingstone, I presume.”  It was interesting to hear his story.

After lunch, we proceeded on our two-hour walking tour through the rainforest trail along the amazing Victoria Falls.  Near the beginning of the rainforest trail was a bronze statue of David Livingstone looking over the falls.  Judy, Aryn, Katheryn and I gathered together for a photo. 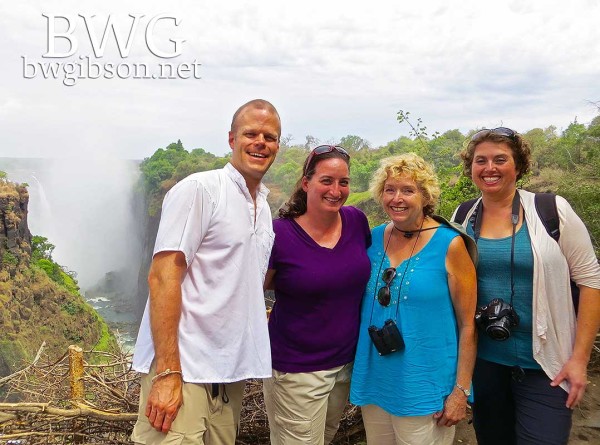 Me with Kathryn, Judy and Aryn (left to right)

In some of the photos of the falls we saw back around the visitor’s center you could see a rainbow spanning along the falls.  I thought to myself:  Wow!  I hope we get to see one of those today.  Well, I underestimated my expectations because there was a rainbow in almost every view of the falls.  Magical. 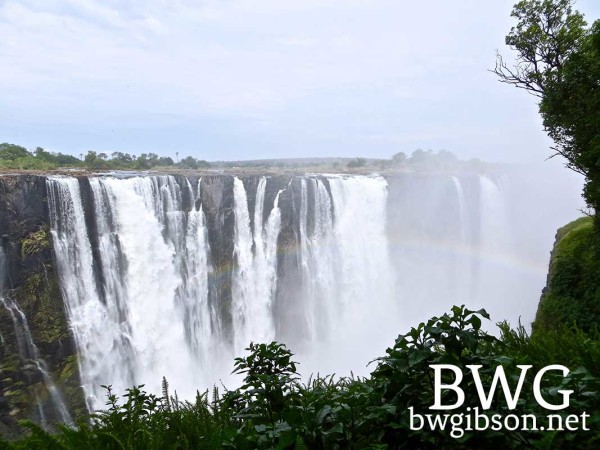 A view of the beautiful Victoria Falls from one of the lookout points along the rainforest trail. Notice the rainbow my camera captured in this photo.

We walked from the beginning of the trail (just outside the Rainforest Cafe and the gift shop area) all the way to the end that looked across at the Victoria Falls Bridge that connects Zambia and Zimbabwe. 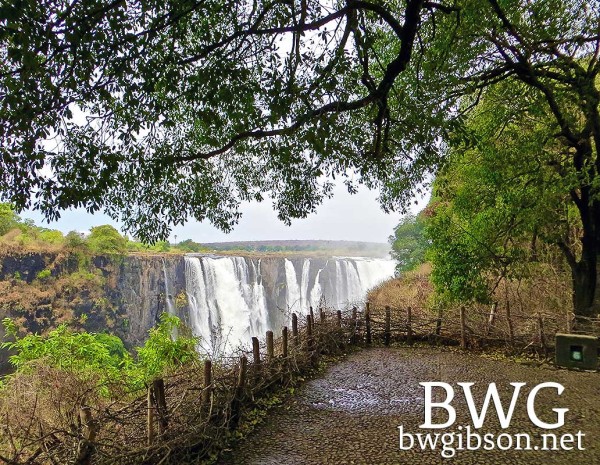 Another view of the falls. This pic was taken with my cell phone.

The walk lasted from 2P till 4P.  For most of the walk I stayed with Vitalis and our group.  But later I ventured ahead and just enjoyed the peaceful beauty of the area.  I was able to gather many of my thoughts about the trip as well as sort through some of my experiences throughout the entire year.  It was a really nice experience and in some ways mirrored the peace of my walk back home along the Towpath in Summit County, Ohio. 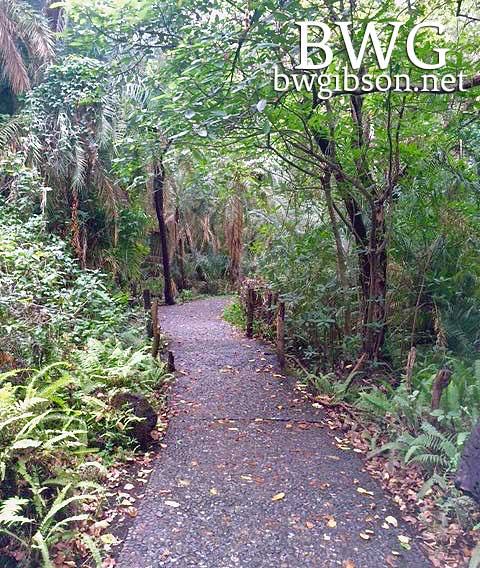 After our walking tour of Victoria Falls, we returned to our hotel and I was anxious to venture, on my own, into the town of Victoria Falls.  I was on a bit of a time crunch because I wanted to mail my post cards and I knew the post office, in town, closed at 5P.  I could have grabbed a taxi for $5 but I chose to hurry on foot instead.  Vitalis had told us it was a safe walk during the daytime, even alone.

My first stop, was the post office.  I needed to buy 13 postcard stamps and get my cards mailed back to the US.