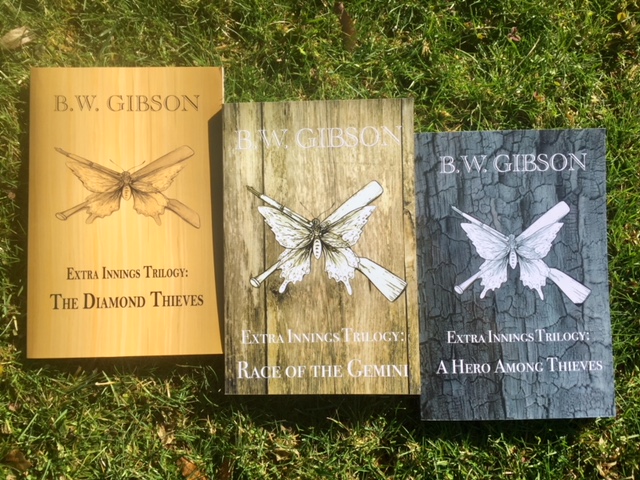 READERS:  Here’s a Brief Summary of ALL THREE Books:

In post-WWII Mississippi, a group of junior high white boys experience a menacing side of their small bayou town when they decide to include their Negro friend, T.J., in a crucial game against their cross-town rivals for domain over the school’s baseball diamond.   Determined to move their Deep Southern town one step towards racial equality, the boys find themselves coming head to head with the hard lesson of learning how to love in the face of hate.

For the story’s main characters, identical twins Jimmy and Billy McGee, this is just one of many coming of age lessons they will experience as their teenage years proceed.  The twins had always found novelty in looking and sounding alike and had always gotten along until girls entered their worlds.  Suddenly, their lives’ primary focus switched from baseball to the opposite sex.  In what seemed like overnight, life became a race for Jimmy and Billy to each establish his own identity in their fishbowl of a town.  These struggles sparked a mini-series of drama both at school and at home but, perhaps, the most intense battles were fought over gaining their parents’ acceptance, as well as, one another’s blessing over their unparalleled plans after high school.

Jimmy, the more conventional of the two, planned to attend college at Ole Miss and pursue his dream of playing in the Major Leagues.  Billy, however, saw a much grander path for himself and secretly enlisted in the United States Air Force with high hopes of being deployed to the Korean War zone.  Little did either know that the impact their decisions would bring upon their relationship would prove irreversible.

PREVIEW AND PURCHASE EACH BOOK BELOW!

In my July 13, 2014 blog I shared 3 Key Qualities to a Successful Blogger.  One of those qualities was Attention to Detail.   For the sake of time, I am going to narrow this topic down to ONE specific detail regarding Historical Fiction: Character Names.

Generally speaking the objective of historical fiction is to capture the particular period in history during which the story takes place.  One important detail that shouldn’t be missed is the authenticity of character names.  Many names that are popular today were not always popular and in some cases did not even exist.  For example, in my book Extra Innings: The Diamond Thieves, one of the main supporting character’s is Charlie Blair.  In the original version of the story, he was written as Ryan Blair simply because I liked that name and though it fit his persona of being a pretty boy.  However, according to my research the name Ryan did not appear as a first name until 1946.  Previously, it had only been known as a last name.  My story begins in 1947, at which point my “Ryan Blair” was thirteen years old.  Fortunately, I caught this oversight and then had to begin searching for a fitting name to this character.  Social Security online has a designated section for popular boy and girl baby names for each specific year in history (you can also search by decade).  This site was very helpful through the Extra Innings trilogy since I can search by state and the story takes place in Mississippi.   (NOTE:  If your book takes place in another country you may try using a site called Baby Name Wizard.  This allows you to search for popular boy and girl names by country).  Through my searching I was able to happily settle on Charlie which was one of the top 10 boy names during the 1930’s in the American South.    REMEMBER:  Search using the decade or year in which your character was born NOT the year in which they are a young adult or adult in your story.

Now I’m going to switch perspectives.  Although it is critical to capture authenticity when representing a specific period in American History, or anywhere in the world, you may also choose a unique name to one or a few select characters.  This may help to give your book some global popularity when it comes to search engine uniqueness.  Although it was not my initial intention with one key character, T.J. was certainly not a popular name until later on in American History.  The only reference I could find was in ‘Roll of Thunder, Hear My Cry‘ by Mildred D. Taylor.  One of her characters was a 13 year old boy named TJ Avery.  I debated whether or not to change T.J.’s name to a more popular black name of the Old South but ultimately believe it was best considering how significant and unique of a role he played throughout the books.

Lastly, is surnames.  This is another area you don’t want to miss.  Make sure you to your research on popular last names AND how they were spelled as spellings may be different in certain regions of the United States as well as specific parts often world.

This extra step of research will have a significant impact on how your book feels to its readers.  Even if your target market was not alive during that particular era, an accurately selected name, especially one unique to that time period, may trigger a memory of a grandparent or great grandparent that will help boost the story’s overall credibility.  The last thing I would want is for my readers to comment: “I loved B.W. Gibson‘s Extra Innings story but I couldn’t get past that Ryan Blair character.  I’m from the South and Ryan was just not a name that was ever used back then.”

What a relief to finally have this book Extra Innings:  The Diamond Thieves finally available.  Not only for myself but all those who have been inquiring about it.  It’s been quite a journey.  The fictional story of identical twin brothers Jimmy and Billy McGee has been some recent revisions – primarily in Chapter 1.

When I first received an actual printed copy and turned to the first page of Chapter 1 – I was not happy with what I read.  The first line use to read:  Jimmy and Billy stood in each other’s way of the bathroom mirror, upstairs in their parent’s Mississippi home, each desperate to find his own evidence of puberty.

I felt “stood in each other’s way” was too negative of an opening.  This was not the image I was going for in this book.  Nor did I want the reader to think that puberty was the primary theme.   The tricky part of removing this line was that I really liked how it read.  So after some careful thought, I found a more impactful and appropriate place for it in Book 2:  Race of the Gemini.  It actually fits better here considering the overall theme of this particular book compared to the theme in Book 1: The Diamond Thieves.

From there the chapter went on with negative comments about how the boys were too hot, their attic bedroom was too hot, they were bored and just one negative comment after another.    I’m not sure why I never had this general impression before.  I guess looking at a computer screen or an 8.5 x 11 printed page doesn’t deliver the same impact as when your actually holding your complete book in your hand … who knows?

So I did a major overhaul to the first 3 pages.  I also did some work to a baseball card trading dialogue between Fist and Boston in Chapter 2 simply because some of the facts were inaccurate.

Probably one of the biggest changes was one of the twins’ friends Ryan Blair.  By some random course of events, I learned through Google that “Ryan” was NEVER a first name of a boy prior to the late 1950’s.  This book takes place in 1947 and the character Ryan Blair was 13 – so he would have been born in 1934.  At this time, Ryan was only a last name.  How me or my editor never caught this before is beyond me.  So I used Google to search for popular Southern boys names, 1930’s and found http://www.ssa.gov/oact/babynames/decades/names1930s.html

The name Charles popped out as one that I liked the most.  Charles was the 6th most popular boy’s name at that time.  PLUS, Charles is my grandfather’s name (on my dad’s side).  Charles Gibson.  So I thought this would be perfect.  Being that this is the South, Charles became Charlie and therefore Ryan become Charlie Blair.

There were a few other minor character’s who’s names needed changed to more accurately reflect the time period.

Additionally, my mom pointed out that the street the McGee twins lived on (which was also the name of the street my mom grew up on in Ohio) was inaccurate.  I had the street name as Greenvalley Drive.  My mom corrected me and said that Greenvalley should be two words, so to better pay homage to my mom’s childhood I changed it to Green Valley Drive.

Lastly, I beefed up one of the character’s roles during the baseball game.  As stated in the book’s summary T.J. was the team’s spark plug, so I enhanced some of his actions throughout the book to more dramatically reflect this claim.

Overall, I am MUCH HAPPIER with this revised product.  I hope that all my readers enjoy it and most importantly, I hope that the last chapter (Chapter 12) leaves them craving the release of Book 2 (of 3): Race of the Gemini.

Happy 13th Birthday Jimmy & Billy McGee.  Or is it?  Stuck at home on account of Mama & Daddy’s stupid house rules, these Mississippi-born twins are going stir-crazy and driving their Mama to her last nerve.

In the collection of conversations I’ve had around the topic of character & setting details in a literary work, I have heard an overwhelming response of folks in favor of authors who provide vast amounts of detail when describing a character’s physical description. And the same goes for a setting if its a key location (such as the town or street where a character lives, a room where important pieces of the story take place, etc).  For example, chapters 1 -3 of The Diamond Thieves well-depicts the main characters physical description and personalities. This is especially important since they are identical twins yet extremely different personality-wise. I have only heard of readers preferring that a character be more left up to that reader’s imagination for minor more utility role characters & places in a book.  The beginning chapters also provide an abundance of visual imagery to describe the small, fictional, Southern town of Eugene, Mississippi.