The walk from the Sprayview Hotel into Victoria Falls town center was quick.  I was amazed how friendly people were.  Random locals passing by would smile and say “Hello” or wave and greet me from across the street.  It was such a friendly and open atmosphere.  I loved it.  My first stop was the post office and much to my dismay it had just closed.   An iron gate covered the glass doors of the entrance and through the glass I could see two clerks behind the counter.  As I looked in the slatted windows a woman called out asking if I needed stamps.  I answered “yes, just thirteen post card stamps.”  She asked if they were intended for the United States and I told her they were.  I thought she was going to tell me to come back tomorrow but she said:  “that will be $13.00” and in a minute she came to the window, handed me the stamps through the slatted glass panes.  I, then, gave her the cash and thanked her.  Wow!  What nice people!

Just outside was a red post office box and as soon as I stamped each of the post cards I slipped them inside.  The time was a few minutes after 5P.  From there, I walked across the parking lot and street to check out the strip of shops along the main drag.  The sidewalk was beautifully festooned with vibrant flame trees. 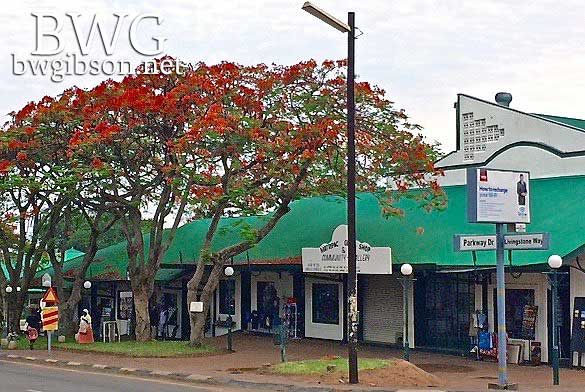 Beautiful Flame Trees along the strip of shops in the town of Victoria Falls, Zimbabwe.

The shops were packed full of locally inspired curios all made by local artisans and very reasonably priced.  I was told you could not bargain in these shops but I soon learned otherwise.  All the shop keepers were very friendly.  You’d walk in their store and they’d greet you and ask where you were from.  If you found something of particular interest they’d say “I can give you the sunset discount.”  If you were not interested you could just say “thank you” and walk away with zero harassment.  As you exited their shop they thanked you for stopping in.  These interactions were very refreshing compared to some of the other overseas shopping I have done (particularly the Aswan and Khalili (open-air) Market in Egypt). 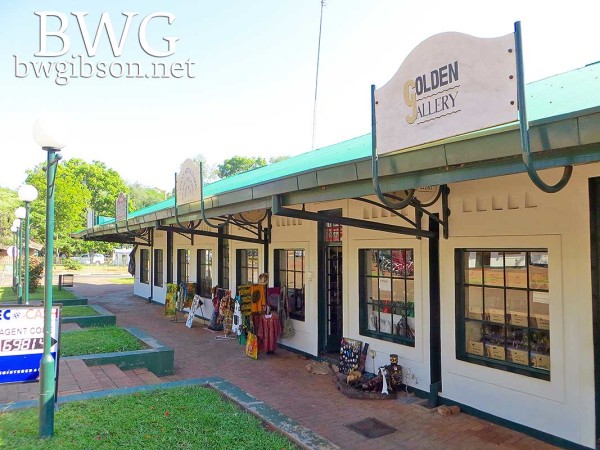 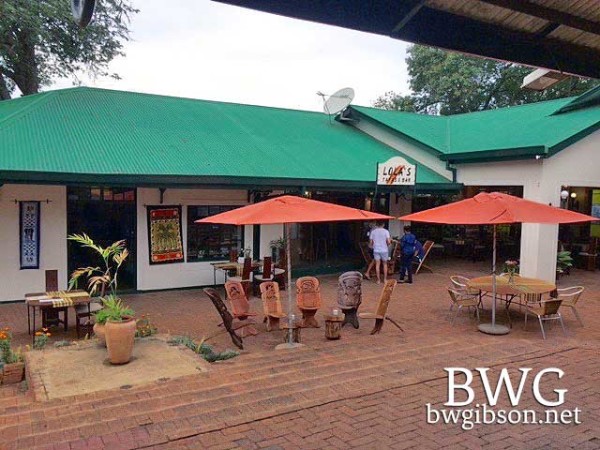 A small cafe among the shops in Victoria Falls

In one of the shops I was captivated by a beautiful 11×17 pencil sketch of a baobab tree.  I thought what a wonderful representation of Africa to display at home.  The artwork was signed by a Vincent and I asked if he was there in the store.  The young man who helped me quickly went and got the artist (who was outside but somewhere nearby).   Vincent Mathe was a young man from Zimbabwe probably in his late 20’s.  He told me about the piece and said his original asking price was $65.  I explained that I was not prepared to pay that price and I was concerned about getting it home without it being torn or creased.  Vincent said he could make me a cardboard tube to store it.  I agreed that should work and knew I would just have to carry it on the plane myself.  From there, he and I negotiated the price of the artwork down to a final $40.  We shook hands and Vincent signed the back of the artwork and wrote down his contact information.  I told him once I had it framed I would send him a picture of it hanging on my wall.  He was so excited about that.  Then we walked to the back of his shop and he picked up a cardboard box and proceeded to tear it down to the right size to make a sturdy tube.  Then he carefully rolled up the artwork and placed it in the cardboard tube for me to safely take home.  I was so happy with my purchase.

Vincent and I took a quick picture together outside the shop. We shook hands again and then I began my walk back to the hotel. 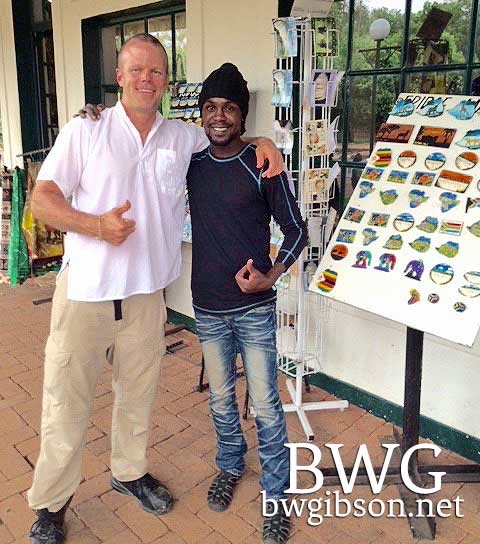 Vincent and I outside of his shop in Victoria Falls

Across the street from the hotel was a small park with iron statues of horses, cape buffalo and other animals.  There was a “congress” of baboons moving through the park.  I tried to get their picture but they moved quickly and soon disappeared.

Before dinner we all gathered into a small room extended from the hotel lobby.  We sat in chairs surrounding a long table and in came a men’s quartet.  I was extra excited for this because I’m really into music.  The group had a robust and dynamic sound.  They sang their own interpretations of a handful of American doo wop songs.  I was hoping for some local tribal singing but listening to them was very nice and reminded me of some of my High School singing days.

Dinner was served poolside and the main course was one of the best entrees I’ve had this entire trip – roasted warthog.  Yes, you read that correctly – warthog!  I could hardly believe how good it was.  Perfectly cooked.  No fat whatsoever and deliciously seasoned with a nice dark brown gravy.  🙂   Too bad we can’t get warthog back in the Ohio.  LOL

After dinner, I sat at a table beside the pool and Facetimed with my mom and dad for a while (they live in Florida).  I was able to catch them up on most of the highlights from this trip and then I went to my room for some air conditioned sleep.  Before dozing off, Aryn and I chatted for a while.  Apparently, that night she had seen a lizard darting around our room.  I warned her she better check inside her shoes before slipping them on in the morning.  I had to be up earlier than her the next morning (5:00A) for my rhino game drive in the Livingston Private Game Reserve.  So excited!  I was told we have an 85% chance of seeing at least one rhino.  I really hope so since it will complete my goal of seeing all five of “The Big Five” (Elephant, Leopard, Lion, Rhinoceros and the Cape Buffalo).  Night Night!